'
DS-13 (Demon System 13) is a ridiculously fast and reckless thrashcore band from Sweden.  Since 1995 these Swede's have toured all through Europe, Japan and the US.  Conquering the planet with their chaotic blend of nasty, dirty, angry, blistering hardcore punk madness.  Sadly, they disbanded in 2002.  DS-13 stands with all the greats from the past to present.  Hands down some of the best shit I've heard come out of Europe.  Below is the band's discography...I think.  The No One Will Thank You When You're Dead CD is a collection of the band's first two 7" EP's, a one-sided EP, all Compilation tracks, unreleased material & a Live Set from 2001.  Also, aside from the newer tracks,  the band's final LP contains tracks from their Splits with Sic Transit Gloria Mundi & Blood Of Others.  Enjoy all of this.  It's incredible!  Dig. 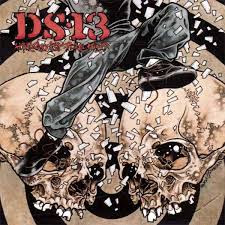 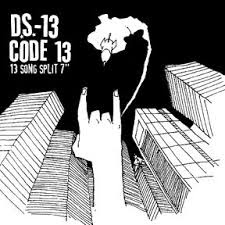 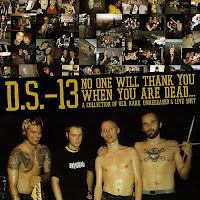